Freshly dropped by Grilli Type earlier today, GT Maru is a bold, explorative, expansive new typeface release that strikes the perfect chord between joyfulness and functionality. The new typeface arrives with five weights in both proportional and monospaced subfamilies—all accompanied by matching oblique styles—while the overall aesthetic combines the ‘warmth and flow of sign painting with the mechanical quality of engraved letters.’

Based in Lucerne, Switzerland, Grilli Type was founded by Thierry Blancpain and Noël Leu in 2009, and initially began as a university side project. Now operating with 7 members across the globe, the independent Swiss type foundry produce type with with a point of view and personality that aims to ‘convey meaning beyond the words they spell out.’ And GT Maru is no exception.

Designed by co-founder Thierry Blancpain—’a graphic designer by training and temperament,’ according to Grilli Type—this new typeface draws its inspiration from the shapes of two different writing systems. ‘GT Maru is based on ideas stemming from two completely different writing systems: the Japanese and Latin,’ says Thierry. ‘Throughout the design process, I kept trying to strike the perfect balance between the typeface as a functional tool, but also as an expression of joy.’

GT Maru’s playful personality is enhanced by two emoji fonts, allowing you to express yourself ‘even when you’re at a loss for words,’ while its multiple styles give it a changeable personality—strong and functional, or totally hyper. During his time spent in Japan, Thierry was intrigued by the letterforms around him, saying he ‘found himself pondering rounded letters and the overall more joyful tone of public communication.’ As a result, GT Maru emerges as a joyful, energetic product of Thierry’s five year design exploration into roundness—or maru—in the Latin alphabet.

This is the perfect new typeface for anyone looking to reignite their love for fonts that meet joy with practicality. To get to know GT Maru better, you can check out its fresh new mini site by heading over to Grilli Type now. 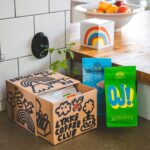